Way back in August our Principal Cello, Brinton Smith, sent me a link to the Cervantes Collection at Texas A&M University Libraries, which houses one of the largest collections of Don Quixote iconography in the world. Brinton thought the Cervantes Collection would be a good starting point for the Sound Plus Vision element of this weekend’s concert, Richard Strauss’ Don Quixote. Since it’s coming up, I thought I’d give all of you the scoop on how that e-mail from Brinton turned into something you will experience at the concert! 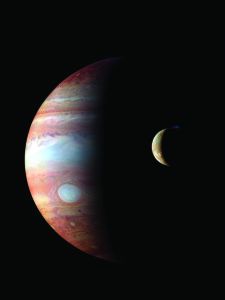 Last year's multi-media project
"The Planets - An HD Odyssey" is an
example of one of the
Symphony's Sound Plus Vision concerts.
Photo credit: Duncan Copp and NASA-JPL

You might already know that our Sound Plus Vision concerts combine live music with elements such as concert video, dialogue, visual images or special lighting. Adding elements to orchestral works is always a sticky situation because there is such a fine line between enhancing the music and distracting from it! Plus, a lot of people feel that the music should stand alone as an artistic statement. I agree that some compositions should be left alone – Adding extras to a Mahler or Brahms symphony, for example, would be like putting extra paint on the Mona Lisa!

But in the case of Don Quixote, Strauss himself truly meant for the music to evoke images in your mind. Most obviously, there is the fact that Strauss based his composition on the first (and perhaps most famous) novel of all time, Miguel de Cervantes’ Don Quixote. But that’s not all: In the score for the two-piano arrangement of Don Quixote, Strauss included titles that describe which parts of Cervantes’ tale are told throughout the work.

Dr. Eduardo Urbina is the curator
of the Cervantes Project and a professor
of Hispanic Studies at Texas A&M University. 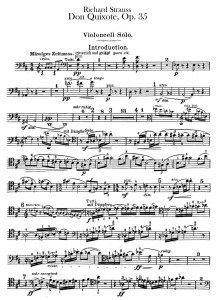 It's quite a task to bring Sound Plus Vision
concerts to life! Rebecca had to mark-up
the entire score for Don Quixote so our
technical team knows when to project
each image onto the in-hall screens.
Which brings me (finally!) to our idea for your concert enhancement pleasure: Show each title on our in-hall screens, followed by an image that corresponds with what part of the story the orchestra is telling through the music. Seems easy, right? Well, easier said than done! Luckily, I was able to receive some incredibly generous assistance from Dr. Eduardo Urbina, curator of the Cervantes Project (and one of the world’s leading Cervantes scholars). Dr. Urbina and his team selected several image options for each variation. That’s no small feat, considering that the Cervantes Project houses thousands of illustrations taken from Don Quixote editions dating from the very first 17th century printings and beyond! Add to that the need for images that would show up well on the screens (sadly, we had to pass on some beautiful 17th century line drawings), and Dr. Urbina definitely had his work cut out for him.

While he was hard at work, I compiled a list of every variation title that I could find – our goal was to create concise titles as close to Strauss’ originals as possible. Next, I marked a score for our video team, so they knew when each image and title should be shown during the performance. This involves many, many multicolored post-its, to make sure every title and image matches exactly with what the orchestra is playing at any given moment – our video team follows along with the score, and manually changes each slide at the corresponding post-it. After that, I created the PowerPoint presentation that you will see at the concert. Finally, after many meetings, revisions, and test runs, Brinton’s e-mail blossomed into reality! 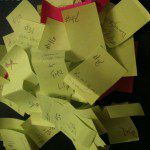 All you end up with after such
a feat are a bunch of colored post-its
(well, and of course an awesome
concert experience!

In all, there are fourteen sections that describe fourteen parts of the story. The solo cello (played by Brinton Smith, HS Principal Cello) becomes Don Quixote, and the solo viola (played by Wayne Brooks, HS Principal Viola) is Don Quixote’s faithful companion Sancho Panza. From the moment Don Quixote decides to become a knight-errant after reading books on chivalry, to the iconic adventure at the windmills and battles with the sheep, to the very end when Don Quixote returns home to die in peace, Strauss vividly spins Cervantes’ tale using the orchestra in interesting, clever ways. Listen for the bleating sheep in Variation II, the conversations between Don Quixote and Sancho in Variation III, and the tremolo in the double basses in Variation VII that lets you know Don Quixote, while flying through the air in his addled mind, has never actually left the ground.

I hope that Strauss would be happy with what I think we’ve accomplished: A new way to extend the jumping-off point for our imaginations, through illustrations that enhance the music. And I hope that you enjoy tagging along on the adventures with Don Quixote and your Houston Symphony!