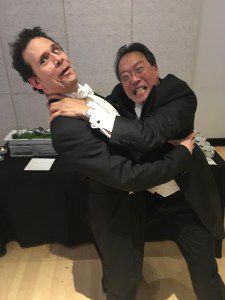 From left to right:
Brinton Smith and Yo-Yo Ma

The attack is alleged to have occurred after Ma’s sold-out, one-night-only appearance with the Houston Symphony last February. The cause of the altercation appears to have been a love-triangle centered on Petunia, Ma’s primary performing instrument.

Petunia was built by Domenico Montegnana in Venice in 1733, and is valued at US $2.5 million. The name “Petunia” was suggested by a student Ma met at a school event in Salt Lake City, and has stuck ever since. “She might be 284 years old, but she is the most beautiful cello I’ve ever seen,” confessed Smith. “After hearing Yo-Yo Ma play her, I was overcome with jealousy. I knew Petunia and I were meant to be together.”

Sources inside the Symphony have confirmed that after the concert Smith secretly stole Petunia from Ma’s cello case and replaced it with his own. The subterfuge was revealed at an exclusive post-concert banquet when Ma recognized the distant sound of a cello coming from another room. Leading a train of high-profile donors and VIPs, Ma followed the sound only to discover Smith with Petunia.

When confronted, Smith lashed out, initiating an intense brawl fueled by caviar and Veuve-Clicquot. “Music is a passionate art form,” explained Houston Symphony CEO Mark Hanson. “Musicians are passionate people, and sometimes that passion extends beyond the stage. We shouldn’t blow these sorts of things out of proportion.”

Others, however, have remarked on the extraordinary nature of the incident. “We’ve had donor events with carnival dancers; we’ve turned Jones Hall into a wine cave; we’ve had an Academy Award-winning movie star narrate Peter and the Wolf; but nothing like this has ever happened. The only thing that comes close is the rumored pistol duel between our concertmaster and Leopold Stokowski at the 1956 Opening Night Gala,” mused Symphony Board Development Committee Chair Jerry Simon. “To be fair, I’ve been told that Stokowski’s tempi were often unorthodox.”

"When confronted, Smith lashed out..."

After some struggle, the two cellists were separated and the instruments returned to their rightful owners. “Despite this aberrant behavior, Mr. Ma has assured us that he has no hard feelings toward the Houston Symphony and looks forward to playing with us again someday,” said Senior Artistic Advisor Aurelie Desmarais.

Comforted by members of the cello section, Smith later came to his senses and apologized for the scene, attributing his momentary madness to the stress of preparing for his upcoming revival of the Castelnuovo-Tedesco Cello Concerto. Not all of his fellow musicians were so understanding, however. “I don’t know what all the fuss was about,” commented Co-Concertmaster Eric Halen. “Who cares about cellos anyway?”