Recently, Houston Symphony principal cellist Brinton Smith and principal trumpet Mark Hughes went to sunny Santa Marta, Colombia to teach and mentor young musicians in the Colombian National Youth Orchestra. Below are Brinton Smith’s own reflections on their experiences there.

It is difficult to believe that it has been more than a week since principal trumpet Mark Hughes and I–still groggy from the previous evening’s Fourth of July concert at Miller–boarded planes to take us to Bogota, Colombia en route to our residency with the Colombian National Youth Orchestra (Filarmonica Joven de Colombia). After a short night in Bogota, we boarded another flight bound for Barranquilla, on Colombia’s Caribbean coast, and I quickly began to regret my poor Spanish language skills when I tried to explain to the Avianca counter attendant that my cello also had a plane ticket! (Any valuable cello needs a separate full fare ticket each time it travels, or else disaster is eventually inevitable.) 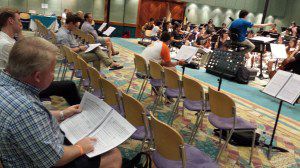 A driver from the youth orchestra met us at Barranquilla and drove us the 60 miles around the bay to Santa Marta, where the orchestra spends a week in intensive rehearsals before its national tour. Begun in 2010, the Filharmonica project unites the best young players, ranging from high school through age 25, from around Colombia. They are selected each year by recorded audition, and then meet for four intensive residencies and tours throughout the year. The foundation flies in professional orchestral leaders and professors from around the world to work with the players of each instrument during their weeks of rehearsal residency. Our own connection to the group comes from Andrés, who recently agreed to become the director of the Filharmonica. While his busy career precludes him from being at all the residencies, the students clearly relish the time they have with him. You can imagine what it means to be a young player in a country whose classical traditions are just beginning to be established to work with someone who is not only one of the very best in the world, but also a fellow Colombian! 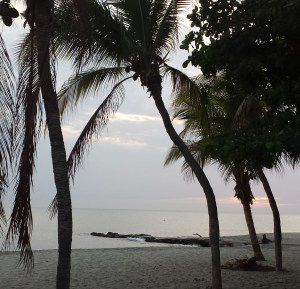 The beautiful Caribbean beach we
never have time to enjoy!

Colombians say that they are simultaneously a first, second, and third world country, but the beautiful resort in Santa Marta shows little evidence of the latter; the scars of a multi-generational civil war and the simultaneous violence of the drug cartels are clearly beginning to heal. Andrés talks of regularly seeing bodies on the side of the road when he was young, but the generation of this youth orchestra is growing up in a different country, with a booming economy (recently discovered oil reserves are likely to soon make Colombia the second largest oil exporter in South America and may be a source of further ties with Houston). While barbed wire and security posts remain around many buildings as reminders of the old days, today the threat of violence is mostly a distant memory, and the students of this youth orchestra know a country of growth, optimism, and opportunity. With towering mountain ranges, lush rainforests, tropical beaches, and everything in between, Colombia is perhaps the most diverse and beautiful country in the Americas, and Colombians are also among the friendliest people you will ever meet. Not every person can match Andrés’ buoyant cheerfulness, but in this country you can at least see where it comes from.

Peacocks beg at the lunch tables!

Unlike El Sistema in Venezuala, which is intended first as a social project and only secondarily concerned with the music, the Filharmonica Joven de Colombia is primarily focused on music. Students come from all walks of life, but are selected solely on ability and desire. Their goal is to improve their own individual playing, as well as that of the orchestra, and they follow a schedule that seems almost impossibly grueling to those of us who are coaching them. There are breaks for meals–in Colombia there is a tradition of small snacks in late morning and early afternoon, in addition to the main meals and it has all been excellent. We are not losing any weight here! But aside from these breaks, the students begin rehearsal at 9:00 AM and continue the schedule of full orchestra rehearsals, family (wind, brass or string) sectionals, individual instrument sectionals, and chamber music rehearsals until 10:00 at night. Last night I scheduled an extra master class for them in the evening and finally let them go at 10:40, but even then they were eager to keep going, and still had more questions! Their hard work pays off. Their ambitious program of Stravinsky’s Petrushka, along with Tchaikovsky’s Rococo Variations, the Abe marimba concerto (both with accomplished Colombian soloists) and a recent Colombian composer’s work has pulled together impressively in this week and the concerts should be excellent. 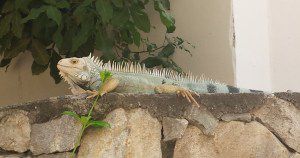 A few things that I know I will remember from our time here: the beautiful beach (although since we work on the student’s schedule, I still haven’t found any time to do anything more than look at it!); the incredible selection of exotic juices at every meal, many from fruits unknown in the States and some not even known outside of this local area of Colombia; the iguanas living wild in the trees, one of whom walked past our window bobbing his head as the cellos rehearsed excerpts from Petrushka; and, most of all, the friendliness, devotion and excitement of the students. I have never seen a group of students who have worked this hard, always with a good attitude, and who have been so eager to drain every drop they can from this experience. I’m often tired of being in a foreign land, of sitting in endless rehearsals, missing my family and home (and my daughter’s 13th birthday), but every time I work with these kids, I come away excited, energized, and hopeful. I’m grateful to be able to share with them the secrets of a beauty that transcends both our worlds, and to be a part of the deepening relationship between our orchestras and our countries. If they represent the future of Colombia, it will be truly extraordinary, and I’m glad to know them.